In “Slogan Postal Markings of Canada in the 1941-53 Period” postal slogans are divided into two broad classifications. The first is Proprietary Slogans, normally sponsored by private organizations to promote local events or causes, although occasionally including Pot Office originated postal directive slogans applying only to a specific office. These are used only by a single office, sometimes for a single year only or also spread over-several years. They are first listed by offices-by years, to satisfy geographical interests, then the same data is rearranged by-years-by offices, to better satisfy chronological interests.

The period covered by “Slogan Postal Markings of Canada in the 1941-53 Period” saw the introduction of the majority of the W.W. II related slogans, including the very attractive ENLIST NOW flag slogans. The period also saw more changes in the types of postal cancelling machines used throughout Canada. Beginning gradually in 1937-38, the Perfect machines installed between 1930 and 1935 to replace the older Universal machines, were themselves replaced gradually by Pitney­ Bowes machines. Over time this effectively obsoleted all the earlier Universal and Perfect dies at many offices, and new slogan dies were specifically manufactured for use on Pitney-Bowes machines. 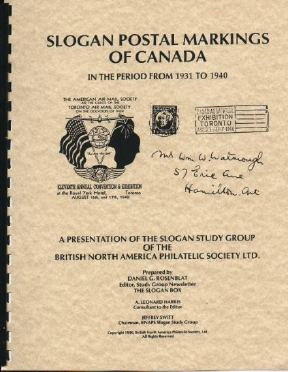