“Air Mails of Canada 1925 -1939″ covers the development of Canadian airmail from the beginnings in 1926 to the interruption of British and United States international air routes by the start of World War II in September 1939. It is not about the early pioneers who carried semi-official air mail to Canada’s northern regions. At first air mail service to the United States involved mail going by surface into the United States, then travelling by air within the USA. Covered next is the development of domestic air mail within Canada, followed by the establishment of air routes to the USA from Montreal, Toronto and Winnipeg.

Air mail to overseas destinations starts with trans-Atlantic routes to the United Kingdom, then Imperial Airways routes across continental Europe, to the Middle East, from Egypt south to South Africa, Baghdad to Singapore, and Singapore to Brisbane. The last three chapters cover mail sent via the Pan American Airways routes across the Pacific, to Central America and the West Indies, and to South America.

The many covers illustrating the various routes and rates are well described, and appendices provide pertinent documentation and rate charts.

There are two appendices. Appendix 1 presents the report of the September 1927 Air Mail Conference in The Hague and the 5 December 1929 Canada Post Office Circular to Postmasters. The first document-set guidelines for treating international mail. The second document gave detailed instructions to postmasters for handling air mail. Appendix 2 is a comprehensive summary of Canada’s air mail rates, 1929 – 1939. 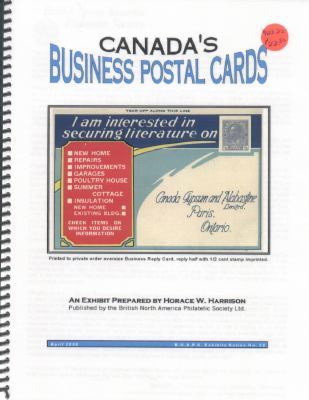